Courage, like all human qualities, is an abstract thing; but it is this quality in man that has enabled him to advance against all natural obstacles through the centuries.

Endowed with intelligence and manual skills man’s courage, even in the early days of his existence, enabled him to accept the challenges of nature. He not only lived in the midst of wild animals but also began to domesticate many of them for his own advantage. Soon, even the most ferocious and largest of animals learnt to respect his courage. They began to avoid him as far as they could.
Indeed, without courage man would never be able to advance from the primitive stage. He would never try to reach the skies or explore the depths of the oceans; but impelled by courage, he left his immediate confines to defy nature, and soon made the world more hospitable and secure for himself. It is this irrespressible energy of man, aided by his courage, that has contributed to the comfort and happiness that people everywhere enjoy today.
Courage is therefore indispensable to almost all human activities. Men need courage to face their enemies and the uncertainties of life. They need courage to operate machinery, to fly aeroplanes, to construct tall buildings. In fact, they need courage to meet all the dangers that constantly threaten them in all their pursuits. Even to accept the responsibilities of a family requires extreme courage. 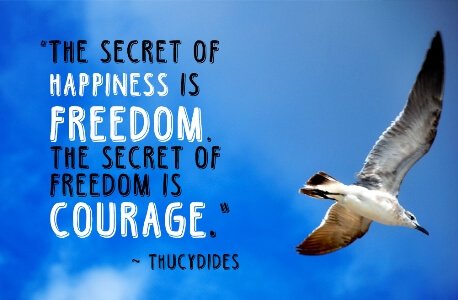 Human courage and valour have been displayed most strikingly in all the battles that have been fought in the history of mankind. Men have fought against men with deadly weapons to protect themselves their countries, families and home. For the protection and comfort of their families, men have also faced other dangers. They have defied dangerous currents in rivers to bring food for their families by boats and rafts. They have also defied storm and battled the waves of the oceans to extract food from them.
Courage, however, does not assert itself always. The instinct of self-preservation usually impels men to seek safety in fight or concealment whenever there is a threat to personal security. It is in moments of desperation that courage asserts itself and enables one to meet all threats; and it is in such moments that men also discover their own physical strength, and other advantages of resistance. For instance, a man who is attacked by an animal will fiercely in an effort to avert tragedy to himself, and in the process discover his own strength and the advantages of using certain weapons to overpower his adversary.
Feelings of loyalty and devotion too have often aroused the courage of amen. A person who is devoted to his family fights tooth and nail to protect his family from destruction or extinction, whatever the consequences to himself. Similarly, a loyal servant may give his life for the protection of his master.
Thus, courage is the most important quality in man. He needs it for his own advancement and to meet all the challenges of his existence.
NEW WORDS:
1. obstacle (n): sự cản trở, trở ngại, chướng ngại vật
2. endow (v): phú cho, ban cho
3. manual (adj): thủ công
4. challenge (n): sự thách thức
5. ferocious(adj): dữ tợn, hung ác, dã man, tàn bạo
6. hospitable (adj): mến khách, hiếu khách
7. irrepressible (adj): không thể kìm nén được
8. indispensable (adj): tuyệt đối không thể thiếu được
9. strikingly (adv): nổi bật, đáng chú ý
10. assert oneself (v): khẳng định, quả quyết
11. self-preservation (n): sự thúc bách tự nhiên để sinh tồn
12. desperation (n): sự tuyệt vọng
13. fiercely (adv): dữ dội, mãnh liệt
14. overpower (v): áp đảo, chế ngự, khuất phục
15. adversary (n): kẻ địch, kẻ thù, đối phương
16. devotion (n): sự tận tụy, sự thành tâm, sự hiến dâng